Once upon a time there was a high school junior named Bieberlocks. It was time to start thinking about colleges, but Beiberlocks’ parents worried he didn’t have eye of the tiger. Everyone was stressing about SAT’s and GPA’s and AP’s—that was everyone except for Bieberlocks. He just sat around tossing his blonde mane, playing Grand Theft Auto, strumming Sweater Weather on his guitar.

Then along came winter break. Mama and Papa arranged a little SoCal college tour in hopes of lighting a fire under Bieberlocks’ butt. 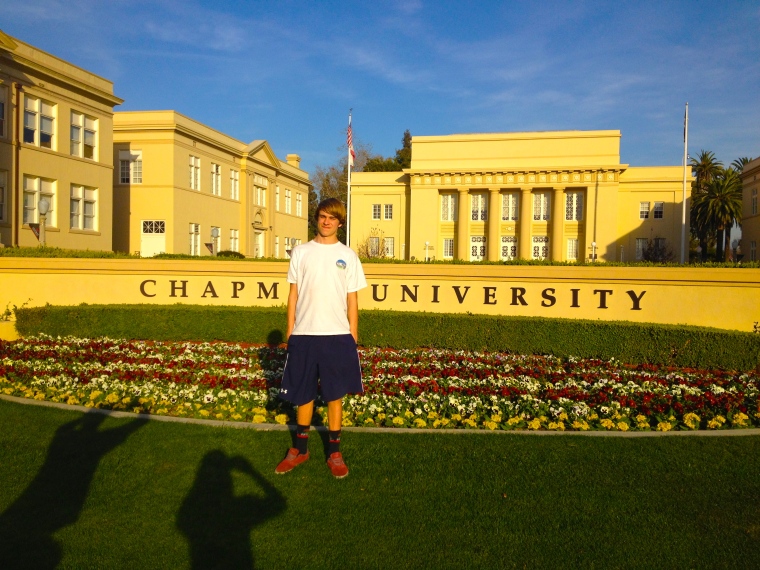 There were grassy lawn as far as the eye could see, piazzas with gurgling fountains, even an artfully displayed chunk of the Berlin Wall.  Mama smelled the orange blossoms wafting through campus. “Oh, I like this school,” she exclaimed. “I really do.” But when the perky tour guide said Papa would have to pony up $50K a year, he growled, “TOO EXPENSIVE!”

“Anyway, it’s TOO SMALL,” complained Beiberlocks when he heard the student population was only 5,000.  Mama was heartbroken. She envisioned Beiberlocks becoming a famous screenwriter and thanking her from the podium at the Oscars. But when she passed a bust of Ronald Reagan on the way out, a shiver ran down Mama’s spine, and she said under her breath, “TOO REPUBLICAN.”

Next, the trio visited University of San Diego. Located on a hill with sweeping views of Mission Bay, the university features Spanish architecture, fabulous succulent arrangements, and a library study nook straight out of Hogwarts. There was even a five-star restaurant with valet parking for co-eds with really rich parents, which unfortunately was not the case with Bieberlocks.

Luckily, Bieberlocks did not dig USD. “TOO SLEEPY,” he said.

“TOO TRAFFIC-Y,” agreed Mama, noticing the shuttles and traffic coursing through the campus thoroughfare.

And so they headed up the 8, past Mission Valley and Hotel Circle to San Diego State. Mama worried that this school was too big for Bieberlocks. She hadn’t been back since the ’80s, and barely recognized her alma mater. “IT’S SO DIFFERENT!” she gasped. Instead of a Walkman, every student had a cell phone glued to his ear. The crunchy health food store she’d frequented in the Student Union had been replaced by a Starbucks!

Bieberlocks took one look at the hot co-eds soul cycling in the mack daddy fitness center with the 50-foot climbing wall, and the bronzed bros long boarding through campus, and he said, “JUST RIGHT!”

Mama looked at the tropical campus, lush with banana trees and birds of paradise. She thought about surfing in the warm La Jolla waters while visiting Bieberlocks. SDSU even offered a Film/Business major. Maybe she’d go to the Oscars after all. Mama smiled and said, “JUST RIGHT!”

And when he heard the $20K price tag, Papa, too, said,  “JUST RIGHT!”  Then he told mama she better start job hunting STAT.

Bieberlocks was so ecstatic at the thought of attending such a fine institution he promised to NEVER play Grand Theft Auto again, and spend ALL his time studying for the SAT’s and making straight A’s.

Well, not really. That would truly be a fairytale.

Where will Bieberlocks wind up? Stay tuned. After all, there are more colleges to explore. Can’t you just hear it now…

UC Santa Barbara? “TOO MUCH TALENT!”