It seemed like just yesterday we dropped Tanner off for his freshman year at SDSU (read about that here.) The year flew. Before we knew it, he was baaaaaack!

Or at least I thought it was Tanner. On second thought, I was convinced someone took my sweet thespian son, and sent a frat boy with an insatiable appetite home in his place. In hindsight, there were some definite red flags, for instance, when Tanner asked for Sperry’s for Christmas… 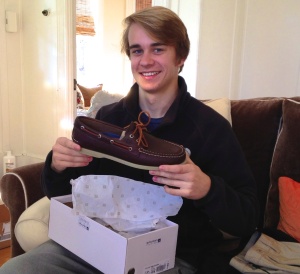 Still, during those first few days after he arrived home Jimmy and I were constantly looking at each other wondering, “Who is this kid?”

From the get go, Tanner monopolized my kitchen. He broiled chicken breasts slicked in coconut oil and sprinkled with Mrs. Dash’s from morning ’til night. His rice cooker was constantly burbling too, its rattling lid announcing a new batch every hour on the hour like some bizarre Japanese cuckoo clock. I watched in horror as Tanner gorged himself on a pound of chicken and a huge KT-22 mountain-sized bowl of steamed rice four times a day. Pretty soon we started calling him Jethro from the Beverly Hillbillies.

I was constantly nagging him to wipe the rice clumps off my counter and eat more slowly.

Tanner had also become a gym rat, pumping iron religiously, sometimes twice a day. At home he constantly flexed in the mirror, and said things like, ” ‘Miring’ these swole gains, mom? All natty, baby.”

For the life of me I had no clue as to what he was saying. Could the Berlitz language school help me speak Meathead, I wondered? Luckily, he translated: “Are you admiring my big, swollen muscles, mother? I do not shoot ‘roids into my ass to achieve these results. They are all natural.”

Another thing: Tanner didn’t want to surf anymore. He hammered us to let him throw “dagers“—day ragers—and actually thought his summer “job” was to achieve Hulk-like veins. “What?” I asked. “Do you actually think those grotesque bodybuilders look good?”

But one day the Creatine powder hit the fan. We were perusing our absentee ballots when Tanner announced he was voting for Trump. I was mortified. Anyone who knows me knows I was raised by Weezie in the most liberal, Jimmy-Carter -lovin’ Tait Avenue cottage this side of the Mississippi.

I thought about all the times we’d volunteered at the family shelter when the boys were little so they could learn compassion. All those Project Cornerstone anti-bullying lessons I presented in their classrooms. And how, on the morning of the ’04 election, Tanner, Sax and I taped homemade “Circle-Slash W” signs on our bike helmets and rode to the polls. Hadn’t my liberal views seeped in via osmosis?

“You are NOT seriously voting for Trump, are you?” I asked.

That was the last straw. For months I had pined for Tanner to come home. Now, I couldn’t wait for him to leave.

But when I dug deep, I realized I was mostly sad. I missed my son. My surf buddy, that sensitive, guitar strumming, John Mayer singing kid who performed in musicals and was voted “Most Likely to be in a Boy Band.” I missed that guy. I had nothing in common with this gainzy frat bro.

I felt better when I talked to other moms who were experiencing the same let down. My friend, Amy, who is the sweetest, crunchiest pacifist mama on the planet, survived her son joining the army. Instead of being crushed, she embraced his decision whole heartedly. She was astute enough to realize he felt his life lacked structure and that’s what attracted him to the military. She also reminded me that she and I used to be taneroxics when we were at SDSU, tanning by the pool, bodies slathered in Blue Bonnet margarine. “That was our thing. This is Tanner’s thing,” Amy said. And she was right.

The more I thought about it, the more I realized when our children are in the new universe of college, they are trying on different personas that may be different from the way they were before. If I was going to have a good relationship with Tanner, I needed to accept him for who he was.

It wasn’t easy at first. But I’ve made a concerted effort to stop nagging him when he shovels in the food. Instead, I inject humor. “I read that we should savor our food by chewing each bite for 20 seconds. Let’s try it.” And we both crack up. Or I’ll send him a funny text from the grocery store…

I also try to find common ground. “Hey, I just read in Us that Carrie Underwood curls 20 pounds. I’m wimping out at 12 lbs. Maybe my end of summer goal could be to curl 20. Can you help me get some gainz?”

Summer is still young, but these days our household is reunited and it feels so good.

When it comes to politics though, Jethro and I have agreed to disagree.

Tanner and I were flying down south for a musical theater audition at SDSU. I saw the sojourn as the perfect mother-son bonding opportunity. After all, I had to milk every moment before he left for college.

We arrived to unseasonably warm mid-February weather. Everyone was in a glorious mood. Everyone except Tanner. Buds jammed in his ears, eyes glued to his phone, he totally ignored me.

On the morning of the BIG DAY, I ran through the La Jolla Cove where we celebrated our boy’s first birthday with a cookout and cupcakes 18 years ago.

How quickly the years passed. Anticipating life without Tanner belting show tunes and dirtying every pan with his muscle man meals made me feel blue.

Tanner’s audition wasn’t until four so after my run I suggested lunch at Puesta taqueria in downtown La Jolla.

After we sat down, I pointed across the street. “There’s my favorite restaurant, Herringbone.”

“This menu sure looks good!” I said.

“Uh-oh,” Tanner said. “‘Not guaranteed to be cooked in a gluten free environment’—NOT good.’”

I chalked Tanner’s grumpy mood up to pre-audition nerves and tried to keep the mood sunny.

Speaking of sunny, Windansea Beach was a few blocks away. I proposed a quick post-lunch swim to help dry his stuffy nose.

I bodysurfed in the warm water. Tanner sat on the beach checking his watch.

We returned to the hotel with plenty of time. Blissed out from the beach, I leisurely ironed his chino’s while he lingered in the shower. By the time we climbed in the car, it was 3:15. I felt a twinge of panic.

It’ll be tight but we’ll make it, I thought…until we pulled out of the hotel driveway. It took fifteen tortuous minutes just to crawl one mile onto the freeway ramp. SD traffic had become as brutal as LA’s.

And who could blame him?

How could I be so irresponsible? How could I misjudge rush hour traffic? Why couldn’t the beach have waited until after his audition? Jimmy’s pep talk echoed in my ears, Don’t mess up, A-game Kimmy.

As we merged onto the 52, I prayed for empty lanes only to find a river of red brake lights. It was now 3:40. And SDSU was still fifteen miles away.

Inside I was freaking out. Tanner’s slot was 4:00 to 4:10—exactly enough time to perform two monologues and 32 bars of “I Chose Right” from Baby. There were no other audition days. No other weekends. This was Tanner’s big chance.

Then an idea hit. “Pull up the audition email on your phone,” I said. “We can call the theatre department.”

He dialed the number on speaker.

1st ring—we are so screwed.

2nd ring—NO way anyone is going to answer the Friday  before President’s Day weekend.

3rd ring—Tanner is never going to forgive me.

Then some guy, no, some Saint named Peter answered. St. Peter told Tanner, “No problem, we’ll squeeze you in when you get here.”

We screeched in at 4:25 and Tanner bolted for the Don Powell Theater.

He found me after his audition, ecstatic. “They were scribbling notes during my song. I think they liked me.”

Relief washed over me like the aqua waves at Windansea.

In the car, we cranked Hall and Oates “You Make My Dreams Come True” and sang at the top of our lungs. We were BONDING. Finally!

The following morning, Valentine’s Day, I woke yet again to grumpy Tanner.

I brunched alone at Caroline’s Cafe; he stayed in bed checking his Twitter.

Sitting on the deck overlooking La Jolla Shores, I noticed a cute towhead nearby smothering his mother in syrupy pancake kisses. Melancholy crept back in. I envied her. Time with her adoring child stretched before her endlessly like the white sand below while mine was vanishing.

I was excited for Tanner to begin this new chapter, but part of me wished he could stay.

I returned to the hotel and we packed. Tanner surprised me when he suggested a quick boogie boarding session at the Shores.

We hustled to the beach and rode waves side by side, meeting in the swirl of white water. I looked over at Tanner, his lips curled into an excited O, audition behind him, not a care in the world. My heart swelled.

Twenty minutes later he called, “We better get going. We don’t want to miss our flight.”

I did not beg for one more wave.

But as I glided across that last wave, a sheet of celadon glass, I thought maybe instead of regarding our time with our children as finite, we should think of those bonds as constantly shifting, yet always there. Like the sand and sea.

“I’m going to miss you guys,” he said, “but I’m gonna love never being late for anything again.”