Every Thanksgiving we run the Silicon Valley Turkey Trot 5K which benefits the Second Harvest Food Bank. Not only is the race a good way to get a little exercise before you indulge, but also it’s great way to help those in need.

The night before the race, I carefully pinned our numbers to our bright purple jerseys and laid them all out for easy access during the following morning scramble. “Don’t forget, we have to get a picture of us wearing our race shirts after the race!” chirped Kimmy.

As always the race was epic. Cruising through the deserted streets of downtown San Jose, serenaded by Taiko drummers, cheered on by bystanders, running alongside chicks dressed like hot pilgrims. What’s not to like?

After we finished, we met in front of SAP Center and headed back to the car, cutting through St. James Park on the way.  There it was Thanksgiving, yet sprinkled though out the park were folks bundled in blankets drinking Coke and eating PB& J’s. Some were obviously homeless. It was heartbreaking. I knew I would go home and enjoy a great meal in a warm house with family and friends, but these people were obviously not as fortunate.

Halfway through the park, we saw a guy chilling on a bench smoking a cigarette. “Hey!” he called. “Where’d you get that shirt, man?”

“Huh?” He didn’t seem to know what the Trot was.

We were halfway to the car when Kimmy said, “We should give that guy one of our shirts!”

“Come on!” she pleaded. “Mine’s an extra small—it won’t fit him. Sax, quick give me yours.”

Saxon grudgingly took his shirt off. I gave him my sweatshirt. We waited at the car while Mother Teresa ran back through the park.

A few minutes later she arrived at the car out of breath with a huge smile on her face. “He loved it!” she said. Her smile faded, however, when Tanner said,  “Nice job, Mom, now we can’t get a photo of us wearing our shirts.”

“Shoot!” she said. “We’ll just have to go and ask if we can borrow it back for a second.”

But she insisted. So back we drove. We got out of the car and headed toward the dude.  His name was Marvin. Marvin introduced us to his lady friend, Esperanza, who was drinking a super-sized blackberry ice tea from the can. “Are these your boys?” she asked.

“Yes,” Kim replied. “These are my sons, Tanner and Saxon.”

Esperanza pointed at me. “That the dad?”

“Yep, that’s my baby daddy.” We all cracked up, Marvin and Esperanza included.

Marvin told us had two daughters, 6 & 7, and boy, were they were a handful. Esperanza said her son was a wrestler at Independence High School.  We stood there for a few minutes, laughing and chatting about the agony and ecstasy of raising children. Then we asked if Marvin would join us for a photo. “Sure,” he said. 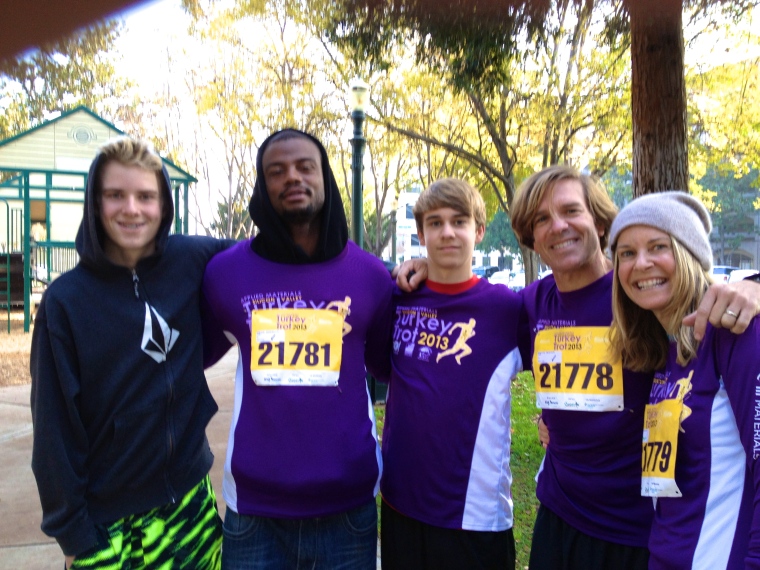 Esperanza snapped the photo, eyeing our shirts admiringly. We told Marvin we hoped to see him next year at the Trot and suggested he start training and ease up the smokes immediately. Right before we walked away, I took off my shirt and handed it to Esperanza. Her eyes lit up in gratitude. (Or maybe she was just checking out my studly naked upper torso.)

Truthfully, it was me who was grateful. They may have gotten the shirts off our backs but in that moment, our family interacted with people we’d normally never engage with in our daily lives. That cool moment turned out to be the highlight of my Thanksgiving.

As we walked away,  Esperanza called out, “You better keep an eye on your baby daddy!” 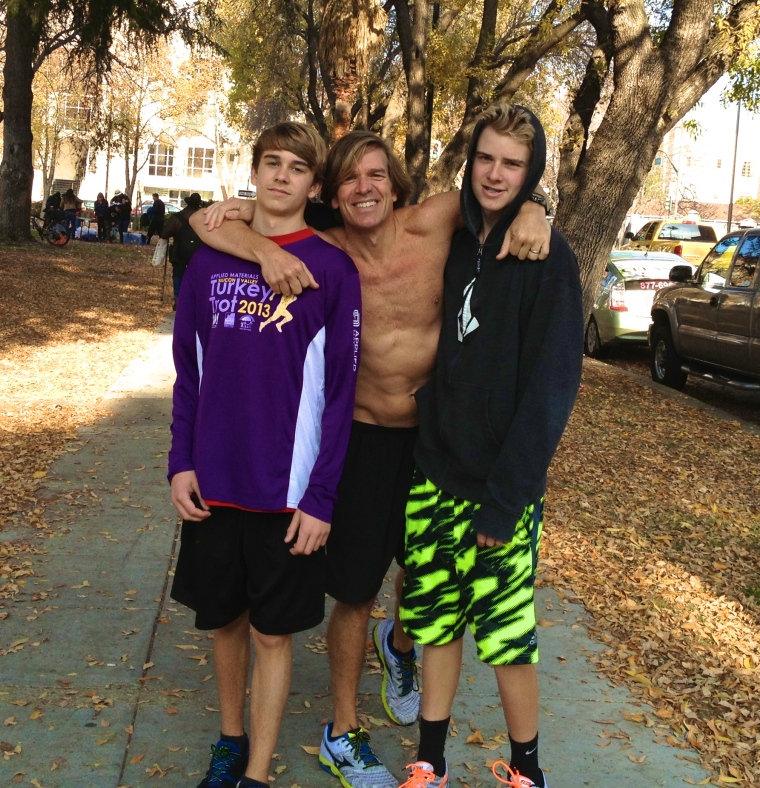 2 thoughts on “Trottin’ with the Baby Daddy”