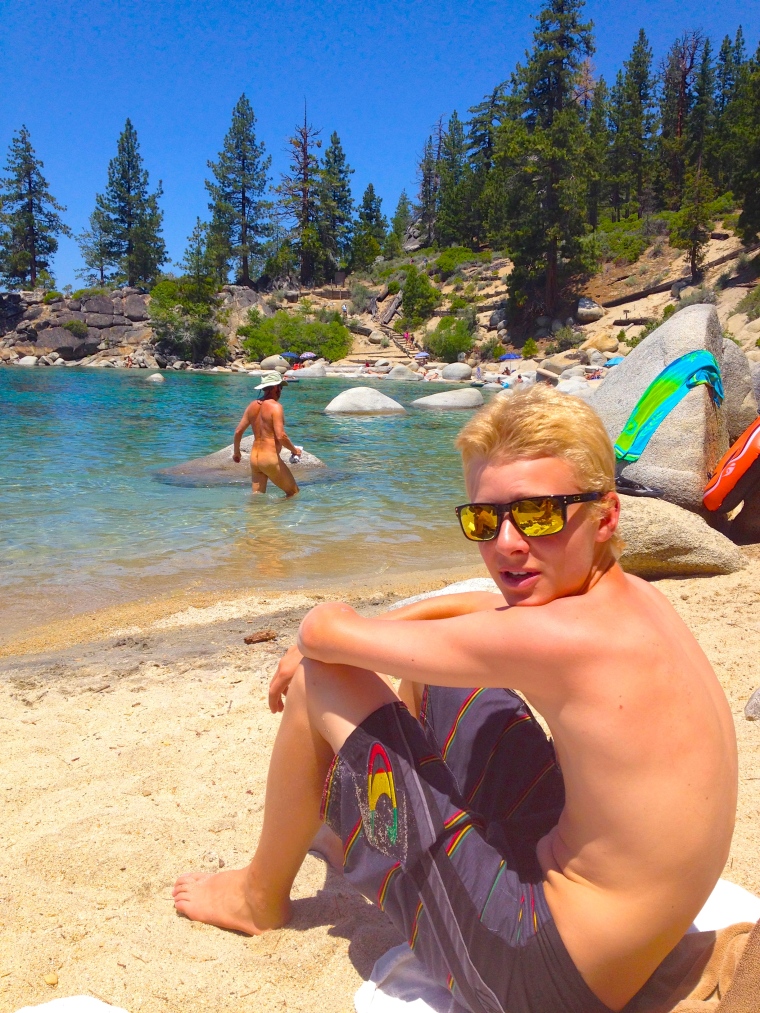 After rafting the gridlocked Truckee River and battling the masses for shady piece of real estate at Angora Lake on a recent trip to Tahoe, the Ratty Pack was craving some solitude. I had read about Secret Cove Beach located a few miles up Highway 28 from Sand Harbor not far from Incline Village. You have to park along the highway and hike down a 1/4-mile trail. When we arrived at 11 a.m., there were only a dozen or so cars which was a good sign. Halfway down the path, pine needles crunching under our feet, we caught a glimpse of gorgeous aquamarine water. Another good sign! 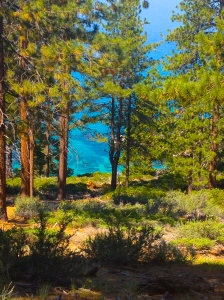 At the end of the trail, we rounded a corner and easily found a spot on the beach. The good news was the crescent of white sand fringed by water in all hues of peacock feather blue! Dotting the beach were only 40 people or so. The bad news? 36 of those beach goers were naked. Yes, we had stumbled upon a clothing optional beach.

Let’s be honest, the RP aren’t exactly the most modest peeps. I got voted “Most Local” in high school (code for “Chick Most Likely to Cut Class & Sunbathe Topless at Cowells). And, one would be hard pressed to find a photo on Facebook of Jimmy actually wearing a shirt.

But we are parents of two teenagers now. We have standards to uphold. Oh, who am I kidding? I would’ve sold my soul for a dip in that pristine aqua water.

No sooner had we unfurled our towels than Tanner whipped out his phone and updated his Facebook status. “The moment when you think you’re headed to a chill beach, and it turns out to be a nudist beach with no inhabitants under the age of 60. Scarred for life.”

He wasn’t the only one who was scarred. We saw a guy floating spread eagled on a raft, baking his buns of cottage cheese to golden perfection. And a pot bellied octogenarian with Brillo pad pubes cruising the beach for geriatric talent.

Let’s just say no one looked like Channing Tatum… 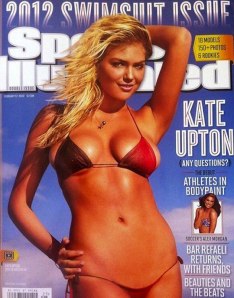 It was a peaceful scene though as people waded through the cove’s clear aqua water and sunned themselves on big boulders, and truthfully, as more people came, the crowd was half clothed, half not.

The boys pissed and moaned for a while—”Ah, gross,” said Sax. “It’s a parade of cheeks and chodes.” But after a while they chilled out and stopped complaining. Tanner memorized his lines for the Los Gatos Youth Theatre’s summer musical, 13, which—gratuitous plug!—everyone should come see!

Sax, Jimmy and I hiked around the corner to a deserted spot where giant grey boulders rose from the lake like sleeping elephants. We leapt off the rocks and luxuriated in that clear aqua water. It was heaven.

After we swam back in, we discovered that we had a new nudie neighbor to our left. His privates were mercifully hidden by a granite rock, although we did catch occasional glimpses of his tatted up tush. “If you want to use the floaty, it’s for everybody,” he graciously offered, pointing to a plastic raft tucked into a granite niche. I smiled and politely thanked him. “Boys, any takers?” I said.

“No thanks, we’ll Pasadena on the communal air mattress,” they said.

After an hour or so, we packed up. We had a good giggle on the hike back to the car, but all agreed we would take the serenity of Secret Cove over kooked-out Lake Angora any day. And as a parent, I was proud of my boys for being fairly tolerant. Why is our society so freaked out by nudity? As long as people aren’t lurkers (and I didn’t get a creepy vibe from anyone at Secret Cove whatsoever), Jimmy and I wanted our boys to know it’s cool by us. Live and let live.

Even if I wished it had been Channing Tatum down there sunning his buns.