On Thanksgiving morning we rousted early and headed to downtown San Jose for the 5K Silicon Valley Turkey Trot. The race benefits the Second Harvest Food Bank. Racers bring canned goods to donate and some people even show up in costumes–seriously, how can you not love Mayflower pilgrims and Butterball turkeys cranking out six-minute miles? 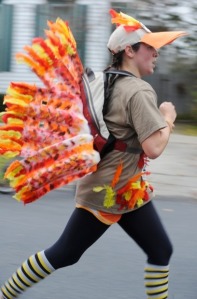 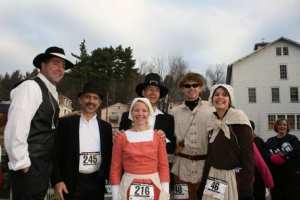 We’ve participated ever since our boys were little. For as long as I can remember the guys have rolled out of bed protesting. “Why can’t we sleep in on our vacation?” “Nobody else’s parents make them get up and run on holidays!”

Saxon, in particular, detests running. Here’s our M.O. in years past—Jimmy Jam deserts us within the first few blocks. Tanner, Sax and I trudge along at a tortoise pace for maybe all of a block, then Saxon grimaces, clutches his side and stops.

I break my stride and walk beside him, pumping him up, “You can do this, buddy!” “Pace yourself!”

Meanwhile his little red face fills with vitriolic rage while he screams, “I haaaaate running! This SUCKS!“

Suddenly, he rockets ahead, legs a Wile E. Coyote blur for oh, 60 seconds, before he cramps up again.

This lovely pattern persists for the next 2 & 3/4 miles. Every freakin’ year.

I never, ever get a workout.

Call us masochists but for some reason, Jimmy and I keep dragging the boys back to the Trot.

This year, the 8th (give or take a year or two when we slammed too many martinis the night before), something strange happened. We woke the teens up and they complied with nary a protest. They were even cheery.

We actually made it into line before the race started—a first.

As we muscled our way into the crowd, I nicknamed Jimmy and Saxon “TEAM CREAM” because they were sporting matching Creamsicle orange Nikes. 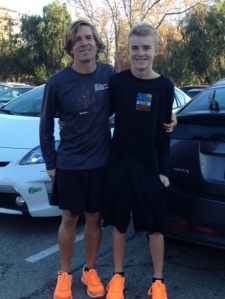 It was nice because we actually had time to goof around for a few minutes before the race. Mostly we did Tom Cruise imitations. Have you ever noticed how Tom runs in every movie he’s ever made? And when he runs, he karate chops the air. 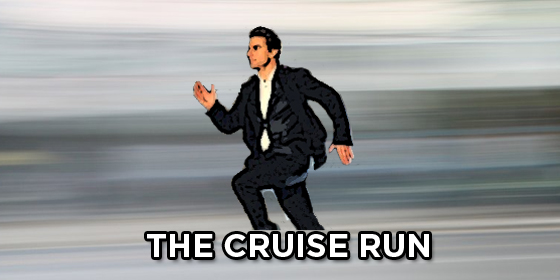 Soon the announcer began the countdown and we were off! Saxon and Jimmy started together. The course is flat, fast and flows through neighborhoods and business areas.

Before long I noticed Saxon starting to run in that strained telltale fashion. Uh-oh.
But for once he didn’t stop and melt down. He kept going.
Tanner lagged behind and I ran alone. The air was crisp. I felt alive and appreciative to start a holiday centered around gratefulness in such a healthy way. Downtown shined up like a new penny in the bright morning sun, albeit a faintly urine-scented new penny. The restaurant windows glittered, Japantown sat tidily with with its tofu factory and markets, sushi bars and noodle houses.

Saxon and Jimmy fell into an easy, rhythmic pace, their Day-Glo kicks shining brightly, scorching the corneas of nearby runners like a total eclipse of the sun.

Feet pounding in time to the Taiko drums lining the course, I followed Team Cream until they dusted me around mile 2. When we all reunited near the finish line, Jimmy told me on that Thanksgiving morn, a miracle had occurred. Not on the scale of the birth of baby Jesus, but a miracle nonetheless. Saxon made it to the end without stopping once. And he even finished with a smile.

As we walked to the car I realized maybe it’s good to make our kids do stuff they hate once in a while.

They may not come around for years—or ever—but how will they ever know if they like something unless we encourage them to try? 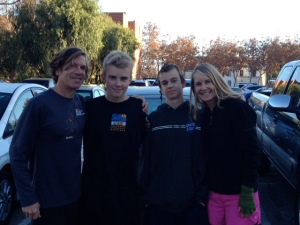 From our pack to yours, happy holidays!

5 thoughts on “Hot to Trot”